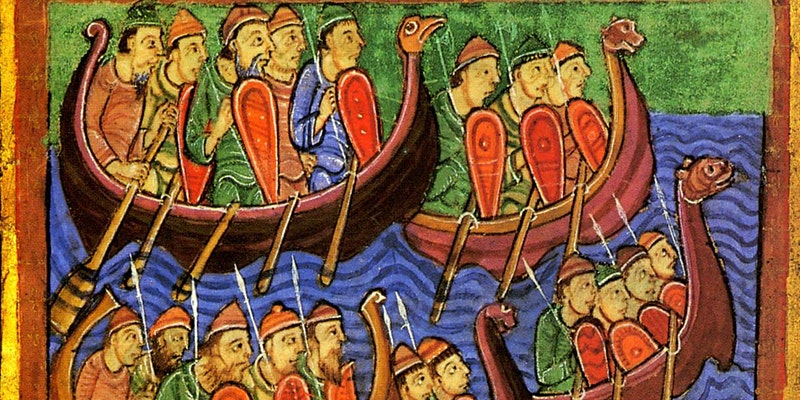 Examining the archaeological and historical evidence for the settlement and integration of the Vikings into East Anglian life and culture.

This 2-hour seminar looks at the archaeological and historical evidence for the longer-term settlement and integration of the Vikings into East Anglian life and culture during the later part of the Anglo-Saxon period. This includes the rich source of evidence offered by the region’s place-names and the material evidence for the adoption of Viking art styles recognised in artefacts from this period.

The presenter is Dr Richard Hoggett, a landscape archaeologist and recognised authority on Anglo-Saxon and Viking East Anglia.

The seminar will be held online via Zoom; there will be a short break about 11.30am. The Zoom link will be emailed to registered participants the day before the event.

This is the second event of the Breckland Society’s latest project – River Raiders.

The project is being delivered by the Breckland Society as part of the Brecks Fen Edge & Rivers Landscape Partnership scheme, supported by the National Lottery Heritage Fund. For more information on the project and the wider scheme, including other exciting projects and opportunities to get involved, visit www/brecks.org/bfer

During the next six months the project will be exploring the history and impact of the Vikings (made infamous by the pages of the Anglo-Saxon Chronicle) in the Brecks through research and fieldwork delivered by volunteers from across the region. Particularly significant events, such as the martyrdom of King Edmund at the hands of the Vikings, will be high on the agenda, but less-well known factors, such as the role which the Vikings played in the establishment and development of Thetford, will also be explored.

Project activities will include training in archaeological and historical research skills and practical fieldwork and will result in the publication of an illustrated report, the installation of an interpretation panel and creation of online resources. Volunteers will also have a role in curating a Viking-themed exhibition to be held at Thetford Ancient House Museum.

Behind the Scenes: Rendlesham and south-east Suffolk in the fourth century

Winter talk: A portal into another world

Howard Carter and the Discovery of Tutankhamun

Winter talk: Bugs in the Brecks