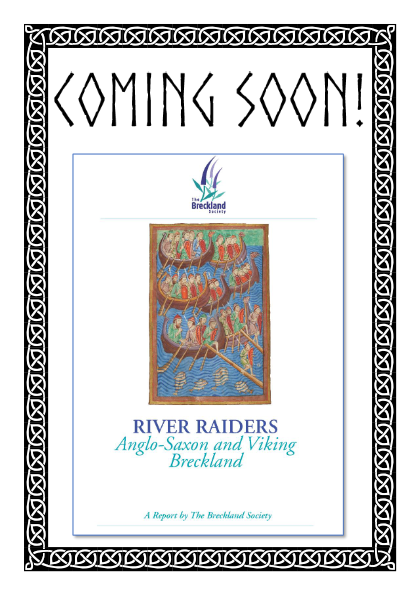 Following the withdrawal of the Romans, from the 5th century onwards Breckland’s river valleys welcomed successive waves of settlers from across the North Sea who made the area their home. They integrated into the local population and left a rich archaeological record of settlements and cemeteries, which have shone a light on these ‘Dark Ages’.

Some 400 years later, in the middle decades of the 9th century, the Brecks became a focus for the Viking’s Great Army, which made camp in Thetford and killed the East Anglian King Edmund. Afterwards, East Anglia remained under Viking control as part of the Danelaw, before becoming part of the newly forged kingdom of England later in the 10th century.

Drawing on historical sources, archaeological sites, artefacts and place-names, this booklet explores the
evidence for the Anglo-Saxon and Viking presence in the Breckland area. The booklet has been researched and written by volunteers working with the Breckland Society on the ‘River Raiders’ project, one of many projects being undertaken as part of the Brecks Fen Edge and Rivers Landscape Partnership Scheme.

The River Raiders booklet will be published by the Breckland Society in August 2022.

Watch this webpage to download your free PDF version of the River Raiders booklet.

If you would like a hard copy then please send an addressed envelope with the correct stamps for a large letter to:

Copies will also be available while stocks last, at Ancient House Museum, Thetford, and to collect (by appointment) from the BFER office at the Carnegie, Thetford, or come and find us at various BFER events throughout the Brecks”